A few years ago, it was a Syracuse fan. Earlier this season, it was a South Carolina fan. Now it’s an Oregon fan. If it wasn’t known before, it should be now. Opposing teams’ fans (usually those outside of the SEC that don’t have jealousy) love Auburn fans. It rings true all across the nation. Auburn fans are awesome. 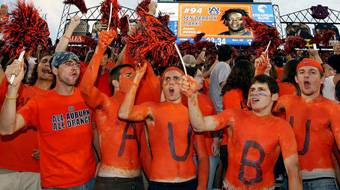 Arizona was an amazing place to be over the past weekend for all of us Oregon fans. And while the temperature, sun, and environment was something to enjoy, it was the kindness of the Auburn Tigers fanbase that has many Oregon supporters, myself included, looking back at the experience with a smile.

Walking through sunny Scottsdale, Arizona on Saturday was a blast. Full of Oregon and Auburn fans, the Scottsdale streets were a blur of orange, blue, green, and yellow. Both Auburn and Oregon held their pep rallies at the same location, three hours apart. And both schools were extremely well represented as fans came out in the tens of thousands to get amped up for the biggest game of the year.

And while it certainly got tiring to hear “war eagle” every time Auburn fans passed each other – and to see nearly every other Auburn fan with a button-up Tigers polo and parted hair – their kindess was nothing less than fantastic.

Sure, there were a few bad apples. But in this case, those bad apples were so few and far between that they really didn’t ruin the whole crop.