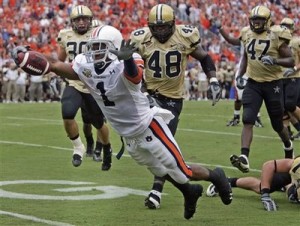 This week brings us the start of a new series on WarBlogle.com. Each Tuesday I will have a guest blogler, codenamed Jacktherabbit, give us his insight on the Tiger’s upcoming opponent. I will say I must agree with 95% of his blog before I post it (I’m an oppressive admin), so our feelings about the game will be around the same. Welcome Jacktherabbit to WarBlogle.com, then let him have it.

I admit I’ve been rooting for you.  Everyone in the SEC (except Auburn fans) will be cheering for you this weekend, but do me a favor and just don’t worry about making those big plays this weekend.  Vanderbilt is a funny team this year.  They are 4-0, ranked 19th nationally in both polls, and have two impressive wins in the SEC.  The South Carolina game was defining in that Vanderbilt finally won a big game at home, and the victory over Ole Miss is looking better each week.  To make them look even better, they are the outright #1 in the SEC East.

The interesting aspect of Vanderbilt is not that they are doing incredibly well, but how it has been done.  Statistically, Vanderbilt is last in the SEC in total defense and total offense.  How can a team that beat Ole Miss be dead last in the conference in both major areas of the game?  It makes you wonder where Vanderbilt is making up for it.  Vanderbilt is simply winning the battle of turnovers.  Vanderbilt has recovered 4 fumbles and get this…10 INTS! That’s 10 interceptions over 4 games all leading to W’s.  I’m not good at math, but that’s 2 1/2 interceptions per game which leads the conference.  I know Auburn people paying attention to Chris Todd’s “noodle arm” are a little worried after looking at those stats.  Not to mention Vanderbilt is 2nd in the league behind Auburn in sacks, but cause opponents to lose more yards than Auburn.  Beginning to understand why this weekend will be a big game for Auburn?

After breaking down some of the statistics it is easier to see how Vanderbilt is 4-0.  Having watched several of their games it becomes obvious to see that Vanderbilt capitalizes on big plays, interceptions, sacks, etc.  One thing Bobby Johnson has accomplished, finally, is to close out football games.  How many times has Vanderbilt come close and just couldn’t put it away? That has changed.  Rest assured this weekend will not be like most Auburn-Vanderbilt games.  This weekend it actually matters.

My only comment is if Vanderbilt does manage to beat us this week, then they will be my pick for the SEC Title, if for no other reason than it’s Vanderbilt!

I don’t see it happening. AU is too physical for Vandy.

I got this from http://www.auburntron.com but it was too hilarious so I decided to copy it.

9 ) Gameday or not, your still all nerds

3 ) I got here in Julio’s new escalade

How dare you promote another site on this site!

SORRY! I had to give credit where credit it due.