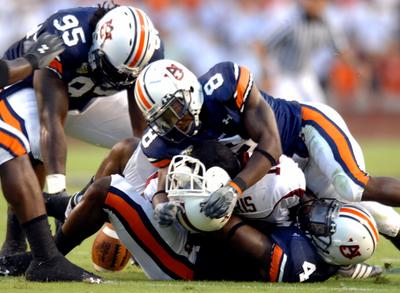 Auburn over New Mexico St.(55-20) – The first half was a little bit of “Oh no. We really are not going to be good this year. How am I gonna get past this one at work on Monday?”. But then the Brandon from the ’05 Georgia game showed up to save the day. After struggling in the first few drives, besides help from a very good catch by Rod Smith, Kodi Burns was pulled to give the veteran another chance, and besides one freak fumbled snap, Brandon showed us what a 5th year senior QB should have shown us and what we had expected to see since week one. On a side note, that’s what I hate about people cheering for a certain player over another. It makes you choose sides, so I almost felt like “Haha, Kodi isn’t doing good”, just because I wanted all those people who booed Brandon and acted like Kodi was gonna come in and just set the world on fire to feel like idiots. So even though Brandon was struggling and we needed Kodi in there, I felt myself pulling for Brandon over Kodi just because of the jealous frat boys booing Brandon. So people, cheer for our team and let the coaches make the decisions. The coaches try really hard to keep QB controversies out mainly because it divides the locker room of 100 players. Don’t make it worse by dividing the fan base of a half million. Anyway, back to the game. The second half was Auburn football: lots of good running with an occasional touchdown pass. Ben Tate was better. Mario Fannin was even better(I called the last long TD run he had). We still have too many dropped passes. Prechae needs to step up and Robert Dunn redeemed some first half drops with some really good efforts after the catch. All in all, I don’t really have any clear thoughts about the Florida game. They looked lackluster against Ole Miss, which either means they aren’t as good as we think, or they are gonna come out this week mad and fired up from last year’s loss to us. Either way, I think we have a chance because we finally showed signs of life, regardless of the opponent, and Auburn and Tuberville have a track record of playing better against top 10 teams on the road(besides LSU lately). So anyway, I guess we’ll just wait and see. War Eagle!
I’ll wrap up the rest of the SEC in a few sentences. South Carolina isn’t that good but LSU sure didn’t wax ’em, so I don’t really know what to think. Alabama’s win last week looks even more unimpressive after this week. Besides the fact that if McFadden was on the field for one play in Arkansas’s final drive that Alabama would be 2-2 now, here’s what makes it even worse: Arkansas lost to Kentucky and yes, Kentucky is better this year, but their ‘signature’ win came over Louisville, and they lost to Syracuse this week. Syracuse is terrible. I’m not sure but I think they lost every game last year or close to it, and hadn’t won all of this year. They manhandled Louisville at home. So Alabama barely beat a team that lost to Kentucky, who barely beat Louisville, that lost to Syracuse. It’s a stretch, but anything to remind Alabama that the Arkansas game was not the national championship. The chatter has quieted down immensely since this last weekend though. So all I can say is ‘Thank you, Georgia’.