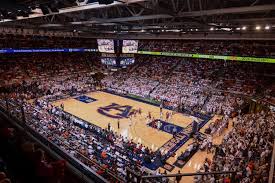 Just under 6,400 fans attended the 2017-18 opening season of Auburn basketball. The fans took in the loss to Barry University gracefully with hopes of a better outcome in future. This hope would soon be rewarded and the charged fans could only cheer on. In the game that followed, the well over 7,000 fans were rewarded by a good performance registering a 102-74 rout of Norfolk State. Auburn was just warming up and the December win over UCONN saw over 8,000 fans celebrate these brave youthful players. The SEC champions comfortably took the wins of 15 home games out of the 16 total. This no doubt sealed the college basketball odds for Auburn with an overwhelming display of great potential.

Bruce Pearl, the Tiger’s coach attributed this success to the unified support from the student body and the famous Jungle; a section of Auburn students. Pearl is a staff member who went on to state that helping the team win the title is the least he could do. The Tiger’s coach was keen to praise the solidarity and unity at Auburn. He alluded that this is indeed a recipe for success. At the Auburn Arena, history was made by the Tigers. This ushered in the quest for the first regular-season title in nearly two decades. The eager fans would fill up the seats an hour in advance to the SEC game. There has been no bigger dedication by a fan-base than this one.

The Auburn Arena is an 8 year old building that had not seen the team win continuously at home without losing. To this end, the Tigers broke the record for back to back home wins. 16.75 points was the margin of home victory for Auburn and this was impressive to say the least. No other team has been able to achieve this at home. This great achievement made the team the talk of SEC; creating a great reputation.

Frank Martin is the South Carolina coach whose Gamecocks were defeated 79-70 by Auburn. Martin was quick to praise Auburn administration for the conducive home-court environment created. Martin also praised the students, fans, alumni and the entire school staff for a job well done. Martin noted that the Auburn fan-base was highly disciplined and this was highly commendable. Getting an opposing coach to say positive things about the champions is indeed an achievement.

The Tigers will now head to the SEC Tournament in St.Louis. They are No. 1 seed for the first time in 19 years. They hope to bring along their home-court luck and prowess. For the NCAA Tournament, the Tigers might head to Nashville and Atlanta for the second round. As they tour, the SEC champions will no doubt tap into their exuberant fan base power. Having this kind of home support will propel the team to take the success to a greater level for the topmost title. For now, Auburn is still soaking in the success with coach Pearl emphasizing the need to take full pride in the achievement. In the words of Pearl, this success is for every Auburn student and supporter. It represents an achievement for the entire state.

Why Online Sports Betting is Advantageous