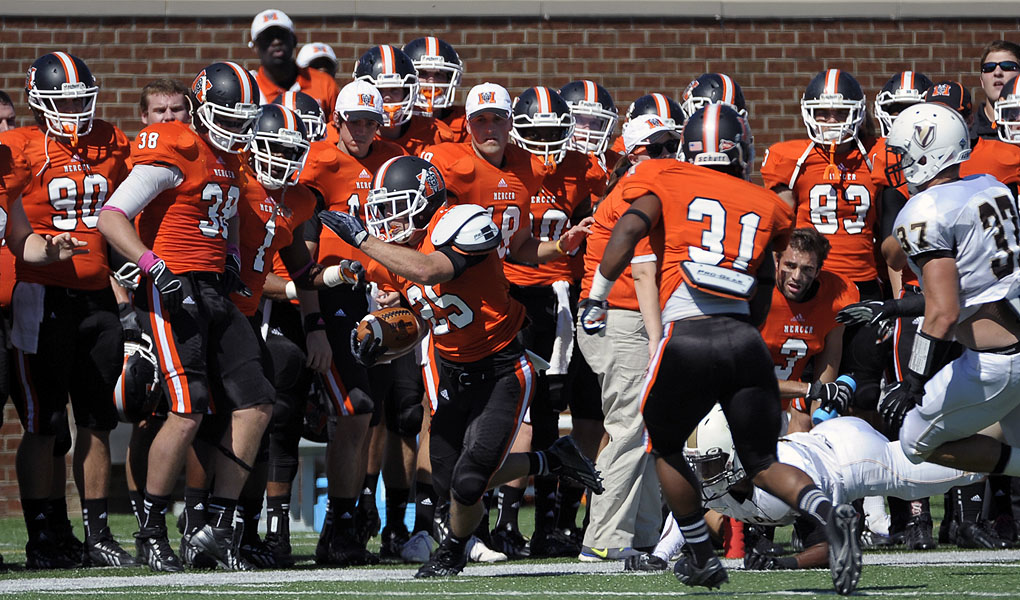 Kristin Banks (@kristinbanks_) is an Ole Miss graduate that has since returned to her hometown of Macon, GA to take an opportunity reporting at Mercer (her parent’s alma mater). She handles sideline reporting on ESPN3 & American Sports Network for basketball, soccer, and volleyball, and will now be with the Mercer football team as the sideline reporter for radio on 96.5 The Bull.

1. What’s the first thing a Mercer fan thinks of when Auburn football comes to mind?

Who is this team that has a real eagle fly around their stadium before every game? Okay I’ll admit it, it’s a freaking cool tradition. I’m jealous. I mean maybe it will grow on our staff and we can get a real bear to run out with the team next year. You never know.

2. What’s the vibe like in Macon for this year’s team?

Honestly, we have a good vibe going in Macon this year. Mercer reinstated their football team in 2013, so with time we’ve gained a pretty big following. People love Mercer football, they believe in the team. This year is our first year not having John Russ, our quarterback who has started the last four years. However, we have a redshirt freshman quarterback, Kaelan Riley, who has a lot of people intrigued. He’s a great kid who is really talented. Mercer fans can’t wait to see how he leads his team this year.

3. Name two Bears that Auburn fans should look out for and why?

Can I name three? I don’t do well following directions. Plus, there are too many good ones to pick from. Okay, great.

Sam Walker, a redshirt junior tight-end. He’s about 6’4’’ 250 (give or take) and can catch any ball thrown to him. He’ll work for that ball too…no one’s taking it away from him.

Tee Mitchell, a junior running back. Mitchell knows how to find the holes. He’s not the biggest guy, but he’ll plow through just about anyone. Your defense better back up when they see him coming.

Isaiah Buehler, redshirt junior defensive lineman. Now this is someone who plays with a chip on his shoulder. He’s one of our most passionate and animated players. As soon as that ball is snapped he’s finding it and going after it.

4. Which two Auburn Tigers worry you the most?

5. Where does Mercer have an advantage in this game?

They know this is one of the biggest stages they will play on this year and that half your team is probably asking, “who is Mercer and where are they from.” With that being said, they will not take this game for granted. It’s early in the season, but they have been working their butts off for this game. Our advantage? Our guys will be playing with more passion. Your guys have already written this game off as a win.

I actually yell, “Hotty Toddy!” Not, “Go Dawgs.” I will say though, we beat Alabama twice while I was at Ole Miss, so that was fun, I guess War Eagle?

7. Who are you two favorite Auburn Tigers of all time and why?

Is Bo Jackson a given? I mean does anyone not like him?! An all-star in two major sports. A Heisman trophy winner. He honestly just seems like an all around great guy. Need I say more? I mean I would probably be too star struck to have a conversation with him if I ever ran into him.

And then Cam Newton. He may not have had the best reputation around the SEC, but I’ve grown to really like him. My mentor, Laura Okmin, did a very raw interview with him on Fox Sports that forever changed my opinion on him. If you’re not a fan you should totally go watch it. It’s almost 30 minutes of just realness.

8. What is your score prediction/analysis for this game?

I mean where both 1-1. Huh? I’m well aware this is a cupcake game for you guys but, I wouldn’t count us out that fast. Like I said earlier our guys play with passion. They are going to do everything they can to win this game.
So let’s say 23-20 Bears… Cole Fisher is a bomb kicker by the way.

9. Where will Auburn and Mercer end up this year?

Mercer will be ranked first in the Southern Conference. Auburn will be lucky if they get third in the SEC West.

Me personally? …no. I wasn’t there. I was still at Ole Miss. I don’t think our guys sit around and sulk about losing to you guys. They are over it. The Bears are still dancing from beating Duke.