My plan was to wait until the feeling I get every time I watch Ricardo’s catch subsided a little before writing this. I didn’t want to sound like a giggly little girl or an awesome catch fan boy, so I waited. As you can see, it’s Thursday. The play happened Saturday. The feeling is still not gone.

I still watch the play multiple times a day, whether it’s the tv broadcast, the sideline view, or the slo-mo version. The feeling is still not gone. But I’ll write this anyway. 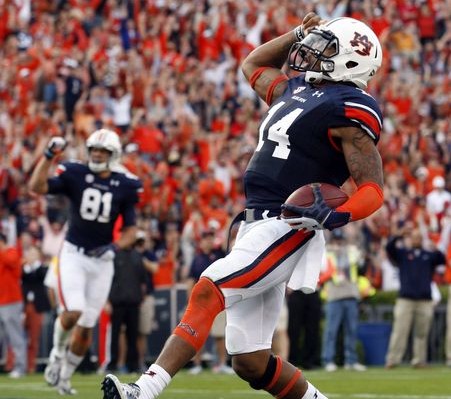 I went into Jordan-Hare Stadium with a confidence level rivaling the Titanic. It was huge, loud, brash, and braggadocios. There was no way Auburn was going to lose to Georgia again. Georgia deserved to lose. Auburn deserved to win. It was in the cards.

The fact that I wasn’t overly cheering touchdowns because I expected them to happen showed just how I felt. It did bother me that some drives ended in short field goals, but they wouldn’t matter. The better Auburn team was beating a downtrodden Georgia.

Auburn was running all over the best rush defense they had faced. Auburn was passing when they had to, but not nearly as much as everyone said they would have to to beat Georgia. The defense was sacking Aaron Murray and all was right in the game.

I continued to feel that way for a little more than three quarters. Well, really until the last quick drive of the 2nd quarter that resulted in a Georgia field goal. It showed Aaron Murray was getting in a rhythm, and it scared me — rightfully so because Georgia scored on their first drive of the 2nd half as well. My Titanic-sized confidence began to sink a little.

But no worries, the Carpathia, I mean Nick Marshall answered right back and Auburn was up 17 points with a quarter-and-a-half to play. The game wasn’t over, but it was in hand.

Then, there was another field goal to start the 4th quarter for Auburn. A touchdown would have put the game away, but that didn’t happen. Instead, the Auburn offense went in a slight shell, somewhat understandably due to the lead, and the Georgia offense turned into the Denver Broncos.

Aaron Murray is the best true pocket-passing quarterback in the SEC and he showed it Saturday. Georgia’s offense is NFL to the core. It’s all about timing, quick passes, and taking random shots down the field. Aaron Murray runs this perfectly, which is how Georgia was able to score back-to-back-to-back touchdowns in around 8 minutes. Well, two touchdowns and a gift from the replay booth.

On the final Georgia “touchdown,” the line judge that called the score took plenty of time to make the call. Why? Because he wasn’t sure, but he threw his hands up anyway, meaning that the touchdown would have to be overturned with direct proof from the video. Apparently there wasn’t direct proof, or the replay official couldn’t put two-and-two together with the two shots they showed side by side to show Murray’s knee down with the ball on the non-scoring side of the goal line. But whatever, the football gods made it right.

@BabyBlogle attended the game and was a perfect little 4-year-old angel, right up until 4th-and-18. At that point, after 700 CBS commercials, he proclaimed that he was ready to go. It was at this point that I realized that I had doubt that the play was going to go well for Auburn, because I told him something to the effect of we’ll leave in a few minutes because it would probably be the last play. I was wrong.

We sit in the North end zone, right down the middle of the uprights, and when Nick Marshall let the pass go, it honestly looked like it had slipped out the right side of his hand. Someone behind me yelled “WHO IS HE THROWING TO?!” He was throwing to Ricardo Louis.

The ball bounced off an angel’s wings, an angel there to right the wrong of Murray’s fake touchdown, and it was delivered into the hands of Ricardo. Seriously, though, regardless of what it took to get the ball past the Georgia defenders, the fact that Ricardo was able to catch the ball in full stride after tipping it his way with his finger tips is being overshadowed by “luck.” He made a great play. He took advantage of what was given to him in a very difficult way. 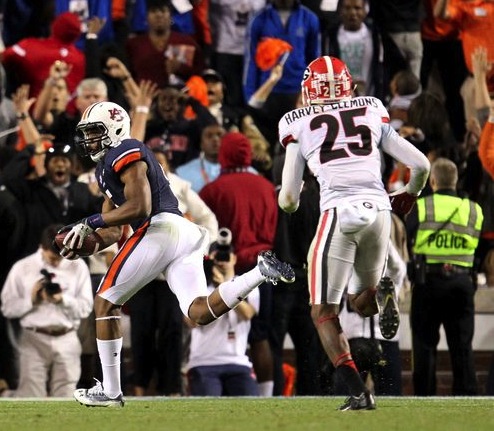 The play was going away from us so all I could really see was that the ball had been batted around. The South end zone’s reaction told me that something good happened. After a second to make sure it was real life, I stepped on the seat in front of me and let out 10 second bursts of the loudest noise my throat could make. I did this for about a minute while slinging @BabyBlogle around. I then told him that it was the best play he’ll ever see in that stadium.

I saw a grown man cry. I saw strangers hugging each other. I saw stars from the amount of exuberance I let forth.

Auburn has been in the spotlight since that play. The haters call it luck. The ones without a dog in the fight call it amazing. It might be a little of both.

All I know is that I was there and Auburn beat Georgia. Just as they should.

By far the best play I have ever seen and I watch football from the time Gameday starts here on the east coast at 9 am until Hawaii plays whoever at 12:30pm. I am a die hard Auburn and Fl St fan. Long story. At any rate I was watching with my wife at the Billtmore in Asheville on our anniversary and went nuts to the point they called security. UNREAL JUST UNREAL. The play incidentally was call Little Rock

Wow, Bama, that all you got?

Pathetic. Almost as pathetic as you being on the Blogle to begin with.

Dang you! Now I’m tearing up just READING about the play!! I too witnessed the greatest moment in (my) history with Auburn. War Eagle

When we watch games on TV, my boys usually end up going to outside to toss their football around until closer to the end of the game. I guess it’s hard for kids to sit through an entire 4+ hour game when they’re not there in person. They came back in just in time to see Georgia march down for the close-enough touchdown, and though I was distraught, they tried their best to cheer me up since they had no doubt that Auburn had enough time to get a field goal after all the video-game football they’re used to watching this year.

Once the 2nd down incomplete pass and the 3rd down sack happened, I saw some eyes start to get teary and then I’m cheering them up letting them know that a loss isn’t the end of the world and all that, but I almost can’t watch it myself. I go tend to the baby so I’m far enough from the TV that it won’t hurt as much, but I do turn around when I hear the play start. I’m waiting for another sack.. nope, he got the pass off, a little wobbly.. waiting for it to be overthrown… nope, it’s headed right for white jerseys… wait, it bounced off them.. wait.. it’s not bouncing on the ground.. wait.. camera is on a blue jersey heading into the end zone.. We all screamed for a split second and than paused to make sure it really happened and there were no flags and we watched the replays for the first of 500 times, and then it was pandemonium, everyone was running around jumping, the baby was squealing, the dogs were alarmed, my phone was blowing up. And of course Murray marches right back down during all of this and still makes it interesting, but it was just an amazing Auburn moment that’s hasn’t ended yet.

I’ve experienced some great moments at Jordan-Hare in my 30 years of attending games. I was there for “The First Time Ever” in 1989, Go Crazy Cadillac, Tre Smith’s blocked punt return TD vs Florida, the 1994 game vs LSU, Calvin Jackson’s 96-yard INT TD vs Florida in 1993, and many more I can’t recall at the moment. That play Saturday night, with what is on the line at the moment, is by far the biggest play in Jordan-Hare’s storied history. Unbelieveable…and War Damn Eagle.

We were in AZ and just back from my oldest son’s PeeWee champ game, saw the catch after praying hard and we just all jumped around like crazy people! This rivals 17-16, Punt-Bama-Punt from 1972 for me… This year feels like one of those magical seasons.