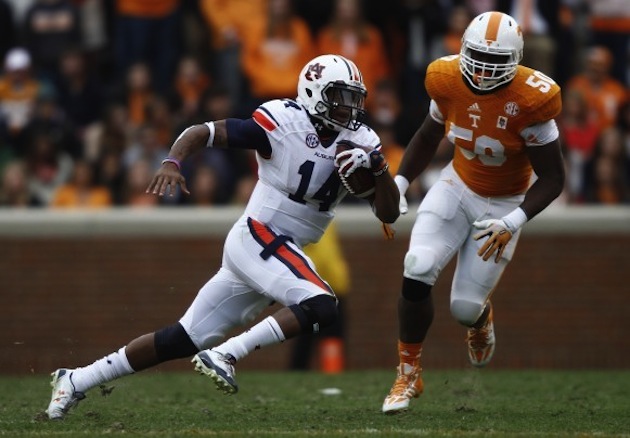 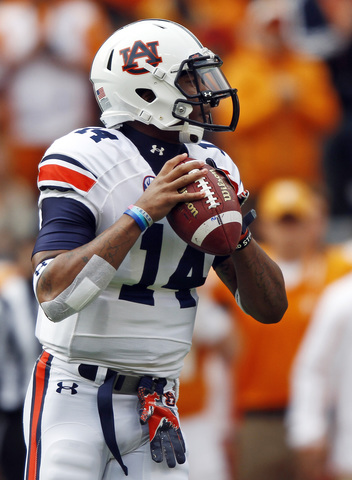 The first quarter or so wasn’t the greatest thing to watch for an Auburn fan, but by halftime the game was in hand and Tennessee fans had resumed their rightful place of groaning, moaning, and making plans for the 2nd half.

It was apparent that the game plan for Auburn was to throw the ball early on to hopefully soften up the defense. Every team Auburn plays is going to load up against the run. That’s just going to happen when you’re one of the top five rushing teams in the nation. Tennessee did it, so Auburn threw the ball. The first score was a pass, but after that it was all run, all the time for all the yards and points.

Nick Marshall runs the zone read almost to perfection, which is exactly why he rushed for 200+ and almost broke Cam Newton’s record for rushing yards in one game. With Tre Mason’s four touchdown performance last week, the Tennessee defense focused on stopping him. The only thing that did was leave the field wide open for Nick Marshall. Oh, and then Tre Mason ran for three touchdowns himself. Auburn might have two 1,000-yard rushers by the end of the season.

Everybody keeps saying that Auburn is going to eventually have to throw the ball to win more games. But are they? Aren’t 444 rushing yards enough? You take what you get. If you can score 55 points, which could have easily been 70, you keep doing what got you there. That being said, I don’t think that means Auburn can’t pass. They had to pass to beat Mississippi State earlier this season. But when you can grind out the clock from the first play and score at will on the ground, it’s the perfect scenario.

Like it has been all season, the defense gave up a chunk of yards in the first half, but other than one play that resembled 2012-style tackling and resulted in the lone offensive touchdown for the Vols, the red zone was on lock once again.

A few 40+ yard field goals is the only thing that kept Tennessee in it early, but when you’re offense can score 40+ without blinking, you can give up field goals all day. As always, though, Ellis Johnson made the adjustments that needed to be made at halftime and Tennessee did pretty much nothing for the rest of the game.

The only coach I wanted to stay from the last staff was special teams coach Jay Boulware. He turned the Auburn special teams around quickly and had them as one of the best. Scott Fountain has one-upped him. I can only think of one decent kickoff return against Auburn this year, and Auburn almost broke 4-5 kicks to the house Saturday. A punt and a kickoff for touchdowns in one game? That’s pretty special. Breaking the NCAA record for average yardage per return? That’s huge. Starting drives at the 45-yard line also sure does help the offense that only needs two plays to score.

Auburn did exactly what a great team is supposed to do Saturday. They weathered the early storm of being on the road and they dominated a lesser opponent. It’s very fun, even if you are watching the game in an upper deck that hasn’t been updated since the 1600’s, to watch Auburn try to not score in the last few minutes of the game. It really is. 32-point SEC road wins don’t happen often, but if this keeps up, it could happen a lot more.

Auburn is down to a two game season. It’s Amen Corner. It’s the final stretch for a spot in the SEC Championship game. It starts with a lesser Georgia. Can Auburn continue to dominate teams they should. We’ll see.

Blogle, Scott Fountain is the Special teams coach. The game was great! When you poppin like 10-15 yards every run play, I say why pass!…. I wish they worked on it a little tho, Lol!

I know that. What are you talking about? :)

Ooooo I see what you did there! LOL

I’d like to see an article comparing stats, sizes, etc, between us and UGA, particularly OL v. DL. What I am interested to know is, is our OL (and WRs?) just THAT GOOD at blocking downfield? Tre is fast no doubt, but he doesn’t seem like a Trent Richardson kind of run people over guy. He’s got to have holes and blocking. Can we reasonably expect our OL/WRs to continue to block so well that it doesn’t matter if they load the box or not? I’m thinking Sammie Coates burns UGA at least twice for long TDs, too, as kind of a warning shot to Bama.