The 2013 NCAA Basketball Tournament is over, and it ended just as I said it would with a Louisville win. Sadly, that means nothing in the WarBlogle.com Bracket Challenge. It’s all about the journey, not just the destination. Sorry. I’ve been watching a lot of Game of Thrones episodes lately.

In terms of the PickOrPlay.com portion of the contest – the portion that gives you prizes – I finished 15th of 119. Pretty good, but not good enough to win. So congrats to users TSJ, Auburn_EE, and Tigerwar for taking the top 3 spots. Email me your address, and AuburnArt and I will get those over to you lickety-split. For those outside of the top 5, go see where you landed here. 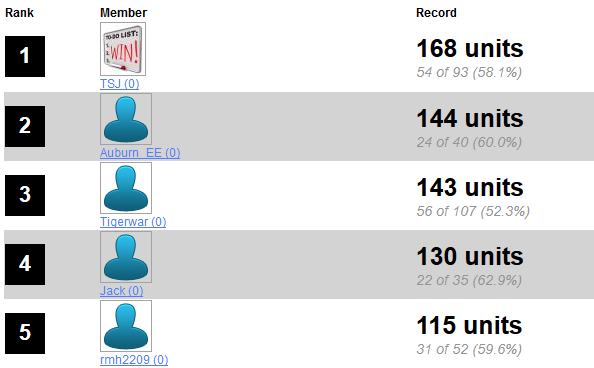 In the traditional CBS bracket group, I finished near the top… again. But I didn’t win… again. Instead, someone with one of the cooler names in history did win. However, they did not follow the rules of having to be in both groups to win this group. Therefore, another WarBlogle.com t-shirt will go unworn.

Thanks to everyone that played in either group this year. It was another year of no pressure given that Auburn wasn’t anywhere near the tournament. Next year, though, that all changes.