This past Monday night, following President Obama’s announcement that U.S. Forces had killed Osama Bin Laden, students across the nation filled the streets, bars, and other favorite spots around their campuses to celebrate. For George Washington students this meant storming the area outside the White House lawn. For Penn State students this meant gathering at Beaver Avenue to shoot fireworks while dressed in costumes. Of course, 95% of the crowds were probably guys just looking for a party, but it was still a pretty cool thing to see.

However, when I sent out a tweet requesting pictures or videos of Auburn students celebrating, the two main responses I got back were “studying for finals” (which is somewhat understandable) and “Toomer’s is blocked off” or something to that effect. That’s when it hit me: in Auburn, no Toomer’s equals no celebration. This was a great chance to take part in a great American celebration using one of our most storied traditions, even though it had nothing to do with Auburn (unless you count this), but there was nothing to do because no one could get near the trees. 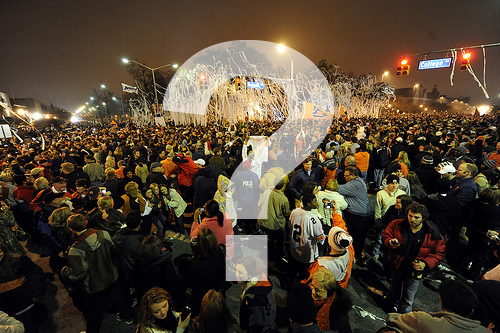 We all know why the school/city of Auburn is not allowing anyone to touch or roll the trees at Toomer’s corner. We all know Harvey is going to get his, even more than he’s already given himself. Sadly, we also know that things don’t look too good for the future of the trees. I’m not saying I have given up hope on the trees’ chances of a full recovery, but I tend to be very quick to get over things and move on. So if we assume that the trees will not be roll-able now or anytime in the near future, I think it’s time we maybe think of a temporary celebration spot or activity.

Again, I’m not giving up on being able to roll Toomer’s again, but we can’t just sit on our thumbs just because one of our traditions is currently in the shop. Finals or no finals, trees or no trees, Auburn should have been able to celebrate in the streets like most other schools in the country.

I’m not saying that we missed out on some huge opportunity to show other schools how well we can celebrate down here, we obviously have had other more important things going on, but when it came down to it, because Toomer’s was shut down, the Auburn students that wanted to celebrate seemed lost at what to do.

That’s just my take. It’s not any fault of their own. Like I said, most were studying, and for those that weren’t, I mean, what else was there to do? I’m glad you asked.

The problem with major outdoor celebrations is that they kind of have to be accepted by the city before they can take place legally via exception to the law. Technically, rolling Toomer’s is vandalism and also involves multiple violations of jaywalking on College Street and Magnolia Avenue. I’m sure the first few occasions involved a few arrests or slaps on the wrist, but after a while the city realized that it was something special, causing them to let it go on and grow to be one of the biggest and most unique traditions in all of college sports. Stupid Harvey.

So first, our new temporary/possibly permanent replacement celebration would have to be something not completely out of the ordinary. Something like rolling the Samford lawn or any of the trees between the corner and Samford Hall might work. They usually end up getting rolled anyway.

Maybe we could roll the trees at the corner of S. Donahue and Heisman Drive (where Tiger Walk takes place). That way the players could even take part in the celebration with the fans. Actually, that idea is pretty dang awesome. Let’s just go ahead and do that next season, provided the Toomer’s trees are still surrounded by barricades. If someone asks you about it, just tell them the WarBlogler told you to do it.

Wait, I may have just stumbled onto the next great idea in Auburn history. I mean how easy would it be to do a $100 hand shake in that mass of people? It’s a win-win.

But seriously, I guess most of my ideas involve rolling trees because I think it would be the quickest thing to be accepted given that it’s what we always do when we celebrate. We throw toilet paper. We could always flip cars and burn couches, but we’ll leave that to the teams up north that don’t win National Championships.

Anyway, that’s all I have. What do you think we should do in the meantime, or possibly, but not hopefully, in the future?

Another cool place could be the two huge trees right on the concourse in front of the student center. Don’t have to worry about cars then. If people were all in the road at Donahue, that would cause a problem- that’s where visiting buses leave. But by the Student Center there are no roads. And the trees are way better.

I don’t know about the cars being a problem, but you bring up an awesome point about the visiting buses. What better way to send Alabama back to Tuscaloosa in November than by forcing them to slowly drive through a mass of Auburn fans and looking at the freshly-draped trees?

Yes, the Tiger Walk intersection. It’s good for many reasons, including the very close proximity to the stadium. That place would get whited out like crazy! Would be nice to have such a short walk. Let’s do it!

Where ever you end up put a camera there.

Wherever Updyke is living as of the first football game, that’s where we should celebrate. I cannot think of a more fitting punishment for that guy than to have thousands of Auburn fans raising hell in his front yard every Saturday night in the Fall.

it would be nice to roll right outside the stadium there in front of the baseball stadium. more students would come because it would be closer.

Well, at first I was resistant to the idea, but I read the comments and gave it a few minutes thought and realize you are right. We can’t really gather at Toomers with the trees “sick.” Too many people and accidental bad things might happen.

After getting use to the idea that Toomer’s needs to be left alone for now, I do think that S. Donahue and Heisman might actually be a good idea. There are lots of trees and traffic lights and right after games there shouldn’t be traffic going through there, right? Plus, it is close to the dorms, certainly closer to the Hill dorms than Toomer’s Corner; and closer to other sports venues (baseball, basketball).

Maybe some enterprising group of Auburn students could construct a sign/artwork structure on one of the corners: Toomer’s Corner West or Temporary Toomer’s Corner.

I love the idea of rolling where the Tiger Walk is…great thinking!

I think where the Tiger walk takes place is a perfect location to “temporarily” roll some trees until a verification is made on what to do or what is going to happen with the Toomer’s trees. Toomer’s corner is Toomer’s corner and shall remain an Auburn celebration tradition for generations to come!!! WDE

So I see that most everyone is in agreement of doing this at S. Donahue and Heisman. Now the real questions are… how is the message going to get out and who going to start the “revolution”?

I like the Samford Hall Idea. Very close to the traditional place of celebration. It would probably lend for some very cool images with Samford Hall in the background, the university sign, etc. It’s plently of space with no cars or anything. Then once the Toomer’s corner trees are back and better then ever, we’re right back where we should be. War Damn Eagle.

Cheering about the death of another human being…good plan