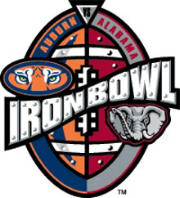 I attended my first Iron Bowl in 1986, when I was four years old. The only thing I remember is the walk to Legion Field. I briefly remember passing some red brick buildings, but that’s about it. I am told by my dad that I slept through most of the game, even while Lawyer Tillman was taking a reverse around left end in the closing seconds to win the first of four straight Iron Bowls. The story is that he was never actually supposed to take the reverse.

I’m not sure how I slept through what was surely a party in the stands, but I don’t remember any of it, so I guess he’s telling the truth. I know that sleeping through the Iron Bowl is almost sacrilegious, but I was four years old and hadn’t had my nap that day.

I didn’t attend another Iron Bowl in person until 1993, I went with a friend and his family and sat in the Orange (Scholarship) seats. We all know what happened in this one, but I’ll remind you anyway. Stan White went down with a knee injury and on the very next play, backup Patrick Nix threw a 35-yard touchdown pass to Frank Sanders on 4th-and-15. Then James Bostic sealed the deal with a 70-yard touchdown run.

One thing that sticks out in my mind, other than this win capping off an undefeated season, was fullback Tony Richardson, who has gone on to play 15 years in NFL, coming to celebrate with whoever had just scored. The thing about it is that he always had his helmet off, which was legal at the time, and he always ran into the huddle of players in a full sprint, meaning that his face/head slammed into the helmets/facemasks of the rest of the players. And he just took it all in stride. Surely you’d think he had lost a tooth or two, but he just kept on celebrating.

The next Iron Bowl that I saw in person (sort of) was in 1997. I actually watched the entire game outside the stadium at a tailgate (don’t you love how “tailgate” can be used as a noun or destination?). I have no idea who’s tailgate it was, I just remember it being by the old tennis courts, which is now the outdoor swimming pool, and we had the stadium at our back. My dad was there and he knew the old guy who owned the RV.

A lowly 4-win Alabama team held the lead for most of the game, so all of us were in pretty bad moods. Needless to say, it didn’t help when some Alabama fans came up behind us trying to steal a view of the tv. They didn’t stay long because the old guy who owned the RV yelled at them and told them they couldn’t watch his tv. I would have helped in the beating as much as I could.

I also remember this same old guy getting in a fight with another tailgater, another Auburn fan, because he wanted to listen to the radio, instead of the tv announcers. There was an obvious six-second delay from the radio to the tv, so we could hear what was happening way before we saw it, but it was his tv, and his radio, so we complied.

All of these bad moods and quarrels went away right around the time that an Alabama screen was fumbled late in the 4th quarter. Auburn got another chance and took advantage. They drove down the field, and with 21 seconds left in the game, Jaret Holmes kicked a 39-yard field goal for the win. His kick not only won the Iron Bowl, but sent Auburn to the SEC Championship Game.

The reason I say I sort of saw this one in person is that right after Holmes made the field goal, I ran to the stadium to watch the celebration. They weren’t taking tickets anymore, obviously, so I ran right in. Just as I walked up the tunnel, (and for some reason I think I’m making this up) the goal posts were floating up the stands towards the top of the student section. They got so close to the edge that the stadium announcer had to ask them not to throw it over. Again, I think I remember this, but I could be confusing it with some other football memory.

Without definite reason, these three Iron Bowls seem a little more special to me. Maybe it was because I was younger and all that mattered was football and Super Mario (ironic, huh?). I think it had a lot to do with the fact that they were so spaced out and I wasn’t as fortunate as I am now to go to seven of the last nine.

Back then the game seemed very magical and mysterious. It seemed like a game that only the high-rollers attended. Now that I am older, the mystery of the game has worn off a little, but the hatred, respect, fear, and more hatred is still there today as much as it was when I was fifteen and willing to fight two grown men because they were trying to watch an Auburn man’s television.

The feeling that this game gives me is like no other. It doesn’t matter if one team is 0-10 and one is 10-0, nothing is certain in this match-up. That’s why this game scares most logical fans on either side.

Given that I’m a little older, have a wife, a kid, and a real job, the sting of losses aren’t quite as strong as they used to be. The trash talk and arguing that go on before the game seems a little less important as well. But for those 60 minutes during the Iron Bowl, I’m a little kid watching a magical, mysterious game again.

I can’t end this without mentioning my favorite memories and thoughts from the other seven Iron Bowls that I’ve attended, but I’ll make it short:

2000 – Rainy, drizzly, sleety, boring, 9-0 win. I remember the word spreading through the crowd that Mississippi State had lost to give Auburn the SEC West crown, as well. The Alabama announcer sure wasn’t going to let us know.

2001 – Before this game I was on the field, for reasons I won’t mention, and was approached by Alabama running back Santonio Beard. He proceeded to ask me if I liked going to a racist school. Actually it was more like “you like goin’ to a raciss school boy?”. You will remember this game was played shortly after some Auburn frat boys decided it was a good idea to paint themselves black for Halloween. (I will not use the term blackface because it’s stupid and makes no sense.)

I proceeded to come up with the wittiest statement ever spoken in a situation where you are asked if you like going to a racist school. I replied “I’m not racist.” Really? That’s all you could come up with. My lack of wit caused Auburn to be upset by the Tide 31-7.

2002 – Auburn was using it’s 4th-string tailback in Tre Smith. Alabama was supposed to stomp us. Auburn handled the Tide easily behind Smith’s ability to squeeze through the line and bust it downfield. My lone visual memory is tight end Robert Johnson falling backwards in the endzone after catching his second TD pass of the day. Auburn won 17-7.

2003 – Cadillac and Ben Obumanu “went crazy” and scored on two long runs (Ben’s coming after a catch, running into a crowd, and then spinning into the open field). The crowd was about the most electric that I had ever seen because they were all pulling for Coach Tubs. This was of course the year that the administration tried to hire Petrino before the season was over. Auburn won 28-23.

2004 – John Vaughn clunked a field goal off the left upright as time expired in the first half, and I remember thinking “it’s over.” I was thinking of the undefeated season of course. I also remember our defense coming up with some huge stops and turnovers deep in their own territory to keep us in the game. In the 2nd half the offense woke up and went on to finish the 12-0 season. Auburn won 21-13. 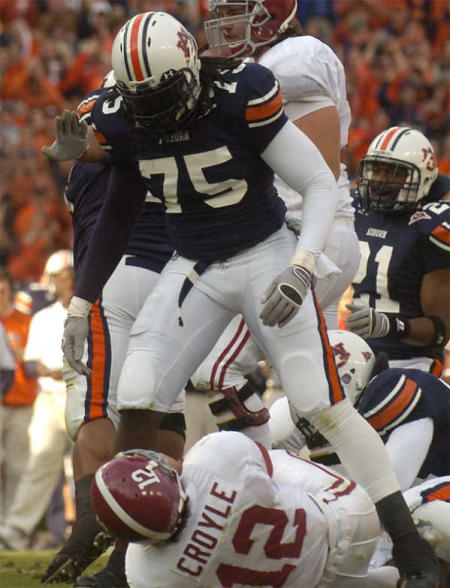 2005 – Honk if you sacked Brodie. The score was way closer than the game was, but that was Tubby-ball. Alabama’s offensive line was a joke. Pieces of Brodie’s mullet were hanging from Stanley McClover’s teeth. This also began the whole ‘4 Finger Salute’, ‘Gimme 5’, ‘Fear the Thumb’ campaign. Auburn won 28-18.

2007 – It was cold. I missed my cousin-in-law’s wedding and a free trip to San Francisco to watch Tubby’s last Iron Bowl win.  I had the task of sending text updates across the country to my wife, brother-in-law, sister-in-law, and father-in-law. I remember sending a text that read “JPW just got decleated”. Was it worth it? I can’t answer that. I have family that reads the ‘Blogle, but I will say that seeing the sixth in a row was very nice.

I will be at the 2009 Iron Bowl. Let’s hope I leave with some good memories.

If you have any memories, good or bad, that you’d like to share, go ahead and put them down there in the comments.

The Alabama A&M Marching Band Is Coming to Auburn

I also knew the 2004 game was over at halftime, but for different reasons. No way Alabama shouldn’t have been up at least two touchdowns after the way it outplayed Auburn in the first half. In fact, I specifically remember telling my girlfriend (now my wife), “If they had outplayed us like that, this place would be empty right now.” So the final result wasn’t a surprise at all, really.

It was the 1997 bama game when the goalposts made it to the top of the student section. The team came back on the field, tore them down, and handed them to the students. If only they hadn’t nearly thrown them over the side…

Yeah I knew I wasn’t going crazy. I just didn’t remember the students storming the field. That makes sense that the players tore them down. Thanks!

As far as I can remember, the only time the students, or any Auburn fans for that matter, have stormed the field was 2001 against Florida. There might be some sentiment to do it on Friday should it happen, but I don’t think it’s warranted. An 8th win in 10 years over the same team isn’t all that ground-breaking ;)

Great blog! I love looking back at all the great (or not so great) games! You are so great at this! Love you.