Mr. FireWillHeath returns for his weekly look at Auburn football from the other side of the state. I’m not really sure what he’s talking about in this post though. Auburn hasn’t done this in years, or at least I haven’t noticed it since LSU beat Alabama in the early 90’s when the stadium started chanting “LSU, LSU, LSU.” Maybe the announcer at Bryant-Denny realizes that most Bammers don’t have personal devices with fancy buttons and flashing screens and whirly-twirlies. They’re the debil I tell ya. 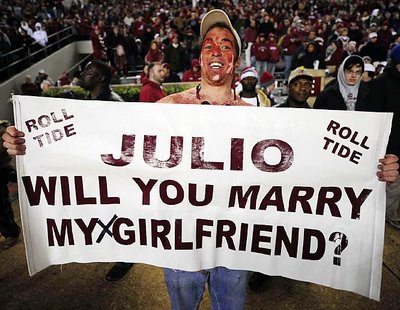 One of the weirdest phenomena we experience as SEC football fans is the scoreboard listen.

You know the one: where your home team’s announcer intervenes in the midst of a game you may or may not care about, and starts giving the audience updates on scores from other games. It’s a puzzling routine for two reasons:

I’m telling you this because I’ve been at the first two Alabama games of the 2009 season. Both of them were played almost simultaneously with the Auburn games. And last week, when the PA came on to announce Auburn’s third-quarter score, 90,000 people responded with an astonished gasp. On the way out of Bryant-Denny I overheard two ‘Bama fans discussing the Auburn final. “They blew ’em out,” one of them said to the other. “So, either Auburn’s gotten a lot better, or Mississippi State’s gotten a lot worse.”

Obviously, it’s early in the season, way too early to say for sure whether Auburn will really accomplish anything substantial this season (or any under the Chizik watch). There are still depth issues, quarterback questions and better (much better) teams remaining on the schedule. But, if Auburn has accomplished nothing else during its first two weeks, it has grabbed people’s attention. No one will look at the AU helmet on its schedule and think “automatic W.” And furthermore, people like me won’t look at Auburn’s offense and say out loud, “If we can score 21 points, we’ll win, no question about it” (and I did say that last year).

And maybe we’ll hear those scores over the PA and collectively gasp a few more times.