Here’s the release from the NCAA. I’ll post more thoughts soon once I get done sending “HAHAHA” tweets to Thayer Evans and Pat Forde. 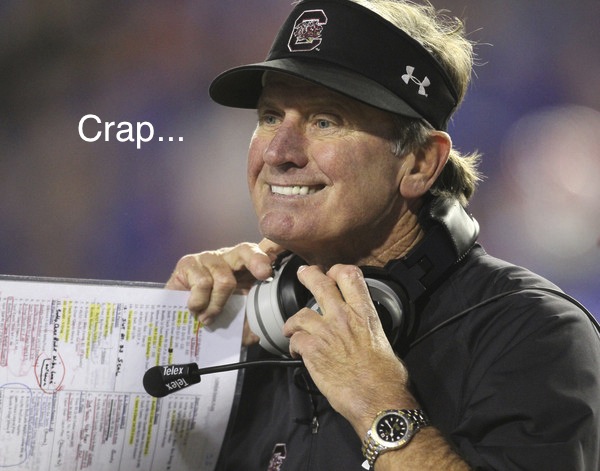 When a school discovers an NCAA rules violation has occurred, it must declare the student-athlete ineligible and may request the student-athlete’s eligibility be reinstated. Reinstatement decisions are made by the NCAA national office staff and can include conditions such as withholding from competition and repayment of extra benefits. Newton was reinstated without any conditions.

According to facts of the case agreed upon by Auburn University and the NCAA enforcement staff, the student-athlete’s father and an owner of a scouting service worked together to actively market the student-athlete as a part of a pay-for-play scenario in return for Newton’s commitment to attend college and play football. NCAA rules (Bylaw 12.3.3) do not allow individuals or entities to represent a prospective student-athlete for compensation to a school for an athletic scholarship.

In conjunction with the case, Auburn University has limited the access Newton’s father has to the athletics program and Mississippi State has disassociated the involved individual.

“The conduct of Cam Newton’s father and the involved individual is unacceptable and has no place in the SEC or in intercollegiate athletics,” said Mike Slive, Southeastern Conference Commissioner. “The actions taken by Auburn University and Mississippi State University make it clear this behavior will not be tolerated in the SEC.”

“Our members have established rules for a fair and equal recruitment of student-athletes, as well as to promote integrity in the recruiting process,” said Kevin Lennon, NCAA vice president for academic and membership affairs. “In determining how a violation impacts a student-athlete’s eligibility, we must consider the young person’s responsibility. Based on the information available to the reinstatement staff at this time, we do not have sufficient evidence that Cam Newton or anyone from Auburn was aware of this activity, which led to his reinstatement. From a student-athlete reinstatement perspective, Auburn University met its obligation under NCAA bylaw 14.11.1. Under this threshold, the student-athlete has not participated while ineligible.”

“We are pleased that the NCAA has agreed with our position that Cam Newton has been and continues to be eligible to play football at Auburn University,” Auburn University Director of Athletics Jay Jacobs said.  “We appreciate the diligence and professionalism of the NCAA and its handling of this matter. “

During the reinstatement process, NCAA staff review each case on its own merits based on the specific facts. Staff decisions are made based on a number of factors including guidelines established by the Division I NCAA Committee on Student-Athlete Reinstatement, as well as any mitigating factors presented by the university.

Reinstatement decisions are independent of the NCAA enforcement process and typically are made once the facts of the student-athlete’s involvement are determined. The reinstatement process is likely to conclude prior to the close of an investigation. It is NCAA policy not to comment on current, pending or potential investigations.

What does that last paragraph mean? It seems like it says that this is not over. Could we still get slapped by the enforcement division?