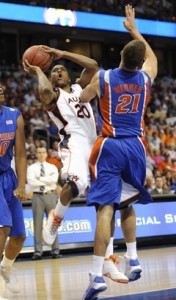 I write this as I sit in a mansion/cabin in Murphy, NC awaiting the Semifinal matchup of the Tigers and the Vols. Right now I’m overlooking an Appalachian valley. This is better than the beach…yes it is. Be jealous.

I started a blogle yesterday morning and was going to write it as a letter to the NCAA tournament committee protesting and pleading Auburn’s case for a bid. Why was I doing that? Plain and simple, I was scared. I was scared that a bigger stage (the SEC tourney) was going to overshadow Auburn’s last month-and-a-half of success. I was scared that Nick CaGaythes was going to ride his hair gel and pointy sideburns right over our postseason chances. I was scared (and wrongfully so) that this team that has proven themselves worthy for the last 10-12 games wasn’t ready. But they proved me wrong. They proved that they belong and aren’t just a scrappy team winning a few fluke games. They are for real. They are a good team. Don’t get me wrong. I wasn’t doubting them. I was just nervous because this game was HUGE and we hadn’t been in this situation in a long time.

My nervousness was there until late in the second half when a 6 year high school varsity letterman showed his team and the rest of the world that he wasn’t scared. He hadn’t been around in those years of horror and basketball tragedy. He didn’t know what it was like to take leads into the half and lose by 20 to a mediocre team. He didn’t know the years where half the talent left just because they didn’t like Jeff Lebo’s style of discipline. He said to his team that those days are over. Teams need to be scared of us. And I think they now are. That freshman, Frankie Sullivan, is going to be great…greater than he already is. Now let’s just hope his dad doesn’t pull a Toney Douglas and pull him from one school because of his position to be sent to another school and eventually play that same position. That’s ok, Toney Douglas, Sr., we don’t need him.

Is 99% of Auburn’s success this season due to it’s strong senior core? Absolutely. But would Auburn be where they are today without a fearless freshman? Well, they probably wouldn’t be playing Tennessee today in the Semifinal game of the SEC Tournament with a chance to absolutely stake it’s claim to at least an at-large bid in the Big Dance. In my opinion, it’s not even close. We were in with just a strong showing against Florida. That fact coupled with a few bubble-teams’ losses yesterday definitely put us in it. But whatever, I’m not getting in to it because I can’t stand to watch those bobbleheads act like they know what a room full of people are thinking, regardless of their past guesses. And that’s what they are….guesses.

Anyway, we have a game today. A big game. Tennessee showed us what they like to do teams that stole a win from them earlier in the season when they handled Alabama easily. Let’s hope our seniors, our freshman, and all those guys in between continue to rise above it all and show us that it truly is Auburn’s time to be for real in College Basketball. War Eagle!

2012 Bracket Challenge Standings before the Finals